The oldest college in the University of Cambridge is Peterhouse, so name, of course, after Peter the Apostle. Founded in 1284 by Hugo de Balsham, Bishop of Ely, Peterhouse is, nonetheless, the smallest College in Cambridge.

The foundation of Peterhouse dates from 1280, when Hugo de Balsham, the Bishop of Ely, planned to start a college on land that is now part of St. John’s College. In 1284

, he transferred to the present site with the purchase of two houses to accommodate a Master and fourteen “worthy but impoverished Fellows”, and Peterhouse was founded. A hall was built two years later; this is the oldest college building in Cambridge. Balsham died in 1286, bequeathing a sum of money that was used to buy further land.

In the early seventeenth century, under the Mastership of Andrew Perne, the College was known as a center for Arminianism. 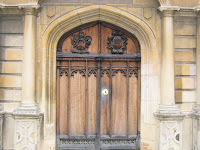 e more of Peterhouse. Here are three ways to see more. Take a Virtual Tour of the college, view the Peterhouse Photo Album, or view the 3-D Map.

To the left are the chapel doors. Observe the dat 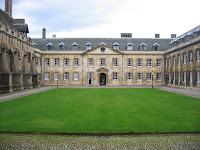 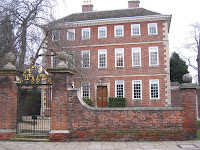