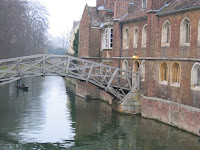 Research in the library is not possible on Sunday afternoon, given that the library is closed, and wisely so, for otherwise scholars would become more eggheaded than they already are. So, after having enjoyed a pleasant dinner with new friends, Don and Melissa Howell, in one of the flats at Tyndale House, I took a stroll through old Cambridge. I snapped the picture on the left of "Mathematical Bridge," spanning River Cam at Queen's College.
Mathematical Bridge strains under a load of several legends. It's a wonder that the bridge remains intact, given the weight of these myths. Here are some of the myths that shroud the truth about the construction of the bridge:
The bridge connects to older segment of Queen's College (The Dark Side) with the newer portion (The Light Side).

Here are few other shots to acquaint you with Queen's College.On the left is the Gate House viewed from the Old Court. To the right is the Queen's College shield.

On the left is the cloister with the long gallery on the left. To the right is the President's Lodge. Finally, below is a shot of the bridge in winter, on a frosty morning, many of which we are having at this time.

Posted by abcaneday at 1:53 AM