Update: For a great sequence of tributes to Dr. Metzger, click here. Mike Holmes, a colleague in our close neighboring institution back home, has written the obituary for Metzger for the Society of Biblical Literature. 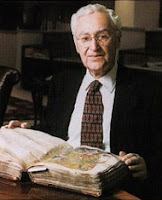 I find the following story ironic and strangely coincidental, if I may say this respectfully. On Tuesday, February 13, during our chapel here at Tyndale House, during the announcements time, a Greek New Testament was held up with a query as to whom it belonged. David Baker, who led the chapel service, noted that the GNT bore the signature of Bruce M. Metzger, surely a prize to whomever the testament belongs. Little did any of us know at the time that Bruce Metzger would die that day.

PRINCETON, N.J. -- Bruce Manning Metzger, professor emeritus at Princeton Theological Seminary and an authority on Greek manuscripts of the Bible, has died at age 93.

Metzger, who was born in Middletown, Pa., died Tuesday of natural causes, according to The Mather-Hodge Funeral Home Princeton.

At the time of his death, he was the George L. Collord Professor Emeritus of New Testament Language and Literature at Princeton Theological Seminary.

The son of Maurice and Anna Metzger, he earned a bachelor's degree from Lebanon Valley College in 1935, a bachelor of theology degree from Princeton Seminary in 1938 and a doctorate in classics from Princeton University in 1942. He became an ordained minister with the Presbyterian Church in 1939.

Metzger began his teaching career at Princeton Theological Seminary in 1938, where he stayed in the New Testament department for 46 years. During his time at the seminary, Metzger developed 25 courses on the English and Greek texts of books in the New Testament.

He was also involved with committees in the production of three new editions of the Scriptures: the United Bible Societies' Greek New Testament (1966), the Reader's Digest condensed Bible (1982) and the New Revised Standard Version (1990).

In 1986, Metzger was elected to the American Philosophical Society in the class devoted to the Humanities and in 1994 he was awarded the F.C. Burkitt Medal by the British Academy for his contributions to biblical studies.

Metzger is survived by his wife of 62 years, Isobel Mackay Metzger, two sons and a sister. A memorial service is scheduled for Tuesday, Feb. 20, in Princeton.

I respectfully reserve comment for those who knew Professor Metzger personally. I knew him only through his works, and what significant works they are. My first introduction to him was in reading the UBS Greek New Testament while in college and then his Lexical Aids.
Posted by abcaneday at 7:30 AM