A Beautiful Sunday Afternoon in Cambridge

The day began overcast, prompting me to carry my umbrella when I went to church on the east side of town at Eden Baptist Church. Rev. Julian Handyman returned to the pulpit today after an extended absence of six months due to illness. He preached a fine sermon on Jeremiah 45. I appreciated the worship service. The sanctuary was filled. Many students attended.
When I emerged from church, it was obvious that I would not need my umbrella today. What a beautiful day in Cambridge! The temperature was around 55 to 60 Fahrenheit, perfect for a Sunday afternoon stroll about Cambridge. First, I took a tour of the King's College Chapel, begun in 1441 and completed in 1547. What an exquisite structure! I learned that the stained glass windows, which took 30 years to complete, were removed piece by piece and store 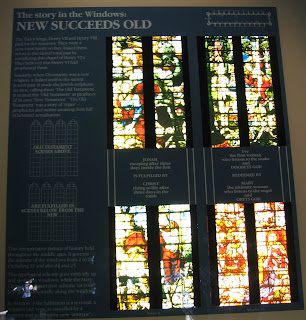 d in a safe place throughout the duration of World War II. The windows are priceless. They depict the biblical narrative, Old Testament on the upper portion of the panels and the NT on the lower portion. Click on the picture to the right to read the description of the windows.

As beautiful as the windows are, the elegance of the ceiling is the definitive feature of the Chapel. The ceiling consists of interlaced ornate ribbing that form fans. Keep in mind that the ceiling is 80 feet high. Imagine the scaffolding required to hold the artisans who constructed the ceiling. If you ever come to Cambridge, you will want to tour King's College Chapel. It is truly grand! 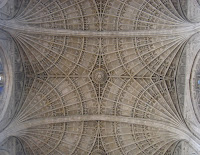 Another cathedral in England that features this exquisite fan vault is the Bath Cathedral.

Sunday afternoon was still young when I had to leave the Chapel, due to an Evensong service that was scheduled to begin shortly. So, I continued on to several other colleges, but I will tell more of these at another time and offer some pictures as well.
Posted by abcaneday at 2:26 AM