Global Implosion and the Korah Effect

Far more serious and far more terrifying than the "global freeze" scare of the late 1970s and early 1980s or the "global warming" fright that presently holds activists, politicians, scaremongers among the

media, and moonbat educators in its grip is the issue no one, and I mean no one, is talking about or expressing any concern about it. The issue is "global implosion." Far more serious than any scare or fright attached to rumors that fossil fuels are quickly being depleted is the horror that looms beneath our feet.
The earth is imploding. Sinkholes all around the world are harbingers of horrors to come. The "Korah Effect" threatens humanity. Because of humanity's greed, earth's fossil fuel resources are becoming depleted at alarming rates. Consequently, the earth is fighting back, swallowing up large portions of land, gulping down houses, devouring vehicles, all to warn humans that they will also be swallowed alive like Korah, Dathan, Abiram and their whole families. See Numbers 16.

Scientists are sounding the alarm, but no one in the media is willing to carry the story. Earth scientists are making urgent appeals to world government leaders, but no 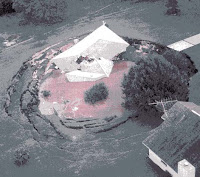 one gives them an ear. President Bush callously turns a deaf ear to these scientists who warn that all mineral mining, all drilling for oil, all drilling for natural gas, and every other form of mining for earth's treasures must stop immediately. Otherwise, the earth will continue to implode at alarming rates.
Some scientists theorize that only those portions of earth's surface where no mining or drilling is or has taken place may not suffer implosion. However, scientists admit that they are merely speculating. Even those places untouched by mining and drilling may implode. They warn that if individuals seek safety by fleeing their at risk regions to areas of earth's surface that have experienced no history of mining and drilling, the added weight of refugees may put extra strain upon those regions as well, causing even those areas to implode.

The Arctic town of Kiruna, Sweden's northernmost municipality, is under threat as cracks caused by decades of iron ore mining slowly erode its foundations.

Such is the fate of humans worldwide. The earth is collapsing because of hu

Will we survive to see another April 1?

Posted by abcaneday at 7:38 AM