Phew! I didn't contribute to global warming. Or, did I? These doomsdayers are killjoys, grinches who find a way to steal joy from every event. Bah, humbug! You grinches, you're not stealing my joy! I sent flowers. I squeezed them real tight and sent them via wire all the way across the Atlantic Orcean and halfway across the American continent. When they arrived on the other end, they instantly expanded to their normal size, full, beautiful, and fragrant. Take that, you Valentine Flowers Grinches! Here are the beautiful flowers, straight from America, no jet transportation required. 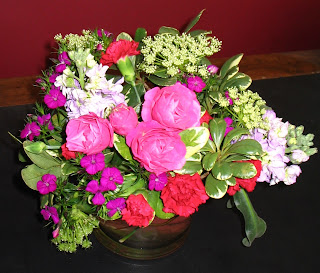 Valentine bouquets 'are bad for the planet'

By Nicole Martin
The Valentine's Day bouquet — the gift that every woman in Britain will be waiting for next week — has become the latest bête noire among environmental campaigners.

Latest Government figures show that the flowers that make up the average bunch have flown 33,800 miles to reach Britain.

In the past three years, the amount of flowers imported from the Netherlands has fallen by 47 per cent to 94,000 tons, while those from Africa have risen 39 per cent to 17,000 tons.

Environmentalists warned that "flower miles" could have serious implications on climate change in terms of carbon dioxide emissions from aeroplanes.

Andrew Sims, the policy director of the New Economics Foundation, said: "There are plenty of flowers that grow in Britain in the winter and don't need to be hothoused.

"Air freighting flowers half way round the world contributes to global warming.

"You can argue the planes would be flying anyway but the amount of greenhouse gases pumped out depends on the weight of the cargo."

Vicky Hird, of Friends of the Earth, said: "We don't want to be killjoys because receiving flowers can be lovely but why not grow your own gift?"

The figures also revealed that imports of roses from Ethiopia have grown from zero to 130 tons a year since 2003.

Kenya is the second biggest exporter of flowers after the Netherlands, followed by Colombia and Spain.

In total, Britain imports more than £315 million of flowers, with the typical Briton spending £39 a year on them.

"That's very little when you think what we spend on CDs, coffee and even lipstick," said a spokesman for the Flowers and Plants Association.

He said the boom in Third World flowers would help poorer countries to build schools and boost the economy.

Posted by abcaneday at 2:22 AM