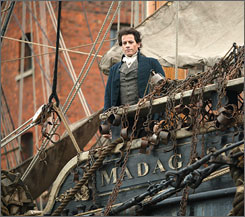 Evangelicals rally around — and disagree on — 'Grace'

In the 1780s, a Briton named William Wilberforce had a religious conversion that led to his life's crowning achievement: persuading Parliament over 20 hard-fought years to abolish the slave trade.

Today, Wilberforce's fellow evangelicals in America are recasting their hero's faith for a 21st-century audience — and stirring debate in the process.

Friday marks the 200th anniversary of Parliament's historic vote in 1807 to abolish the slave trade throughout the British Empire. In more than 800 U.S. theaters, Bristol Bay Productions releases Amazing Grace, a film about Wilberforce's sense of calling and career as a lawmaker.

But in the film, Wilberforce (played by Ioan Gruffudd) seeks God in a garden, not a church. He never refers to Jesus. He displays none of the historical figure's passion for winning converts to Christianity.

"The spiritual side (of Wilberforce) has been extremely toned down," says associate producer Bob Beltz, one of several evangelicals involved in the project. "The purpose of the film is to introduce him to a new generation" by appealing to a broad audience that is not necessarily religious.

But other evangelicals criticize the "toned down" approach.

"His stance (on slavery) might seem 'obvious' to us today, but it was inexplicable in his day without his deep evangelical faith," says Timothy Larsen, a Wheaton College theologian and author of the 2006 book Crisis of Doubt: Honest Faith in Nineteenth-Century England (Oxford University Press). "To leave this out is to falsify who the man was."

Though Wilberforce isn't well known to many Americans, he has long been important to evangelicals. Methodist evangelicals named the nation's first historically black college after him when they founded Wilberforce University near Xenia, Ohio, in 1856. Today, Chuck Colson's Prison Fellowship outreach project sponsors a Wilberforce Forum think tank. The Wilberforce School in Princeton, N.J., emphasizes "the Lordship of Jesus Christ over all things." Books and lecture series also are planned.

Wilberforce's contributions also are being honored in Great Britain for the anniversary year. Britons are issuing commemorative coins and stamps and will reopen a Wilberforce House Museum.

Still, no anniversary event is likely to have more impact than the Amazing Grace movie. With that in mind, some groups are rallying to take part in tie-in activities to make the movie as successful as possible.

Evangelicals say marketing a movie in church requires a sensitive touch. Craig Detweiler, a theologian and co-director of Fuller Seminary's Reel Spirituality Institute in Pasadena, Calif., says a promotional clip could "seem like a commercial in the context of worship."

But on balance, he says, the movie and its worship-based marketing are positive developments.

"The faith community has been clamoring for this opportunity to vote with their feet" and reward faith-friendly mainstream filmmaking, Detweiler says. "The chance to support films that we may believe in is certainly preferable to (merely) protesting what we don't like."

In another innovation, Bristol Bay Productions is encouraging viewers to help end modern-day slavery at amazingchange.com. Amazing Change organizers say as many as 27 million people around the world still endure forced servitude.

According to the Boston-based American Anti-Slavery Group, such situations range from forced prostitution to domestic servitude without pay and without freedom of movement. They say these include as many as 17,000 people who are illegally trafficked into the USA each year.

In waging a film-based activism campaign, Detweiler says, Bristol Bay is following in the footsteps of former vice president Al Gore's global-warming movie, An Inconvenient Truth, which also steered viewers to a website and suggested courses of action.

"More and more films are being used as advocacy for political action," Detweiler says. He notes that Blood Diamond, the Leonardo DiCaprio-starring movie that exposes the dark side of the African diamond trade, belongs in the same genre. "We just haven't seen it cross over into the religious market very often."

Posted by abcaneday at 7:53 AM